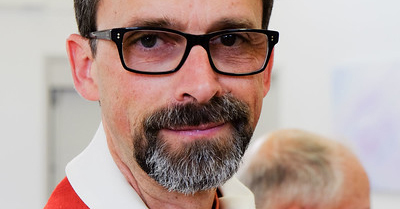 Next in the series of people reflecting on their experience of being part of the St Alban’s community is Rev Dan Hines.

Dan came to St Alban’s in 2006 and stayed with us until 2013, at the invitation of then-Bishop Gordon Light.  His ministry was to consider a new approach to being a priest, both at St Alban’s and at St Hilda’s in Savona.  His mandate was to support the communities in ministry development with a goal to develop local resiliency by identifying gifts and leaders with those gifts within the community. The learning was to be part of an ongoing conversation of discovery about who is God calling us to be, because if we get the “being” right, the “doing” will arise. “Who am I in the midst of this ‘doing’ is a much deeper question.” and transformation happens in the midst of deep listening.

Dan reflected that when he arrived in 2006, the community was “hopeful but tired." The sense was that they were not finished but were hanging on with anticipation that something would be happening.”  There had been a recent infusion of new people that the community was able to retain and integrate into leadership seamlessly. Angus and Debbie, Fred and Cecil and John and Diana had joined the community and willingly took on leadership roles. Ken and Molly had arrived about the same time as Dan; Molly became the musician for Sunday services and Ken joined others in maintaining the church and hall. Dan noted he found Hazel to be always encouraging “although she had her own thoughts about stuff”.

On the approach to ministry and how it developed through his time here, Dan had some observations:  There’s a trade-off with having paid clergy in the community who identify as coach. While it creates and activates the gifts of others, Dan noticed that his living outside the community helped develop that, too.  Presence and participation comes from all the members then. Paid leadership in the community disempowers the community since expectations develop when one is remunerated for ministry. Within an atmosphere of safety and encouragement Dan helped “witness” us into being. Then unexpected things can and did manifest. Dan notes that this approach continues to be St Alban’s gift in the community; while it can be cumbersome and awkward, it is more creative and a true-to-life way of being in community.  Dan’s experience of St Alban’s has been that it is a civic and spiritual heart of the community and we continue to function in that capacity.

Dan spoke of our patron saint, St Alban—he notes we have claimed the name of St Alban who was a non-Christian in the religious sense of the word. Alban was baptized in his decision to give up his life outside the Christian fold and his example comes through in our DNA.

Dan spoke of his appreciation of our non-judgmental approach of spiritual beliefs. Thich Nhat Hanh (a Vietnamese Buddhist monk) is a teacher who gives us a broader view of what is holy and the monthly Plum Village Meditation Group continues to welcome anyone exploring that expansive view.  And Dan found Parker Palmer’s work (a Quaker mystic and founder of Centre for Courage and Renewal) comfortable to bring to St Alban’s and the wider community.  Dan identified our community as being a contemplative community of practice—mystical—and with that, there is a freedom to use wider language. “The Spirit is much wider than the Christian church.” is foundational to Dan’s beliefs and teachings. There are people who are at St Alban’s who approach spirituality from the monastic to the contemporary traditional and, playfully he adds, “it’s okay to be Anglican, too!” There is space and welcome for spiritual seekers who come and to be challenged and to deepen in their faith journey.

As to the future, Dan hoped there could be deeper conversations with local First Nations people. He tasked us with finding out “What does it mean to be neighbour, particularly in relation to people at the Ashcroft Reserve? How do we bridge that cultural divide?” We await the leading of Spirit in guiding that conversation . . .