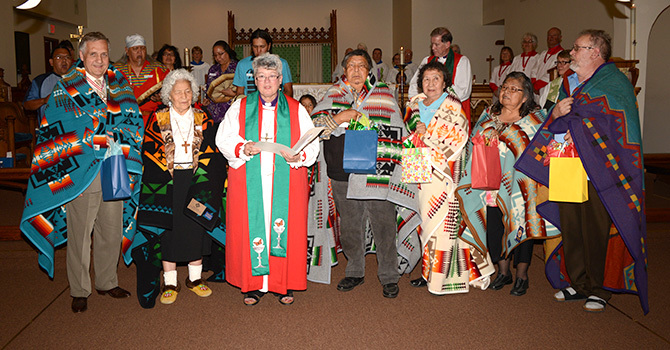 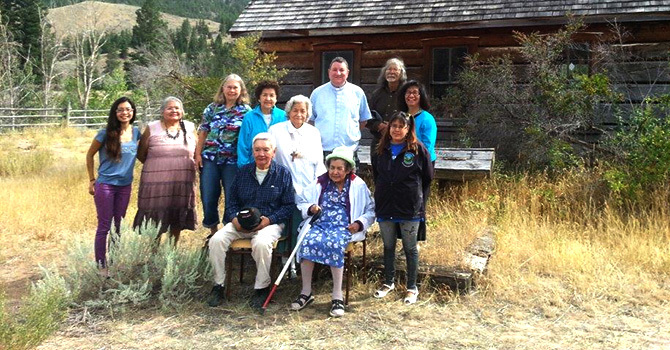 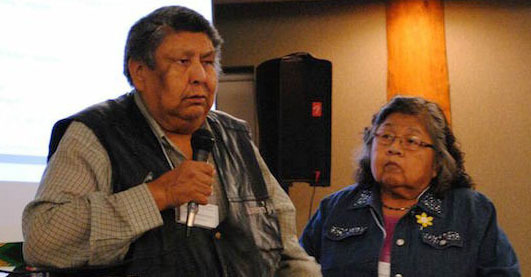 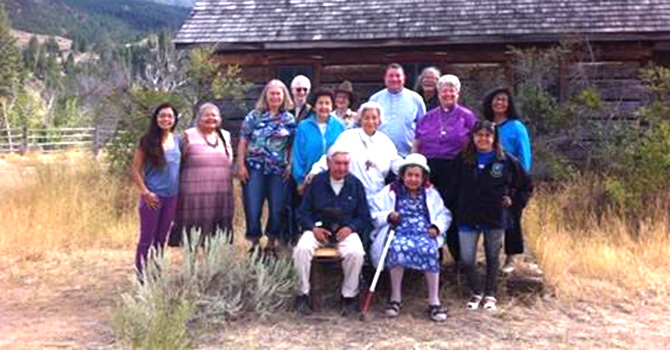 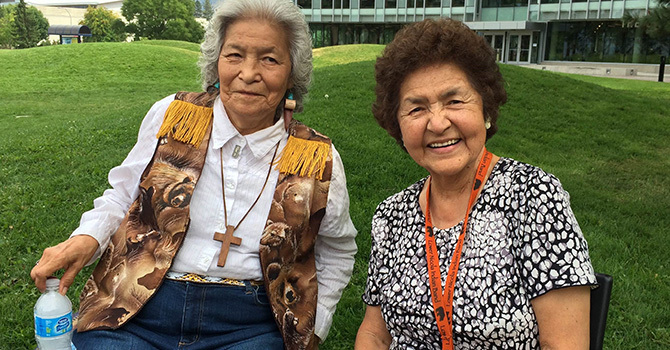 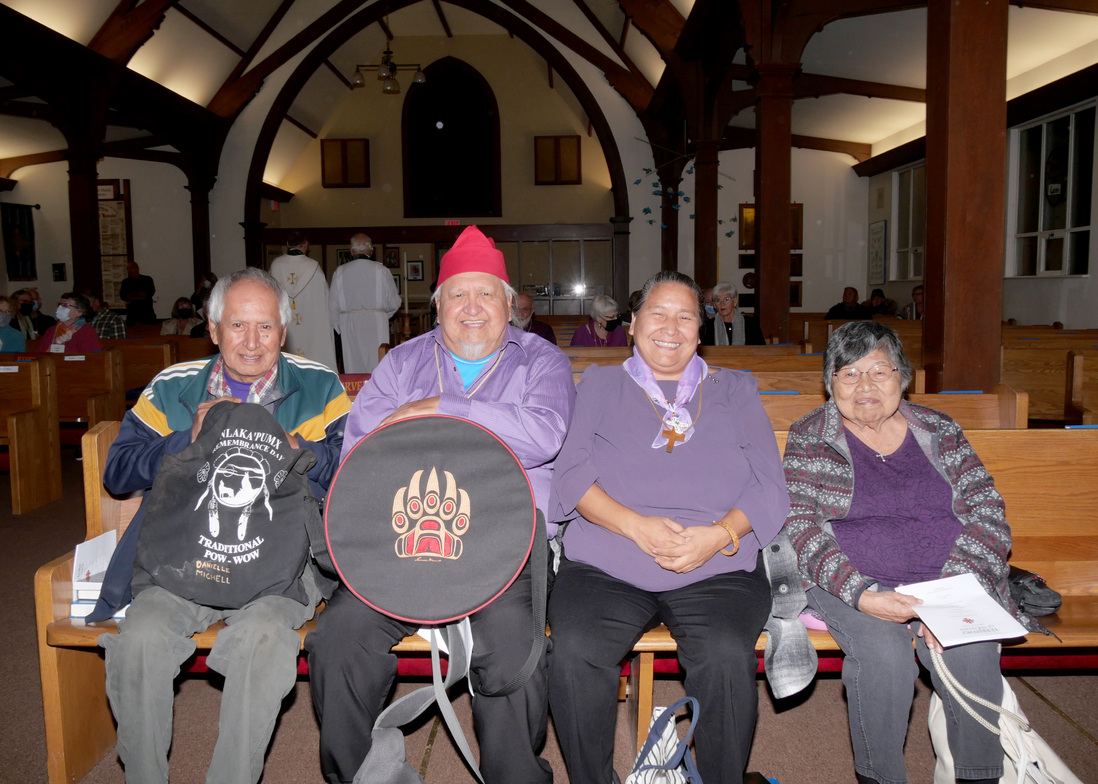 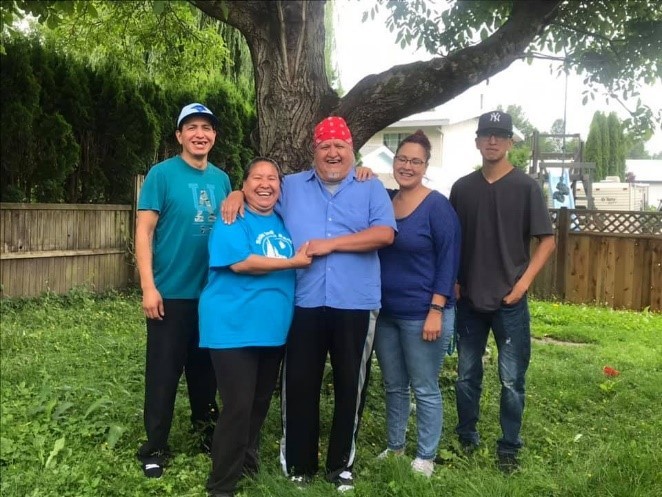 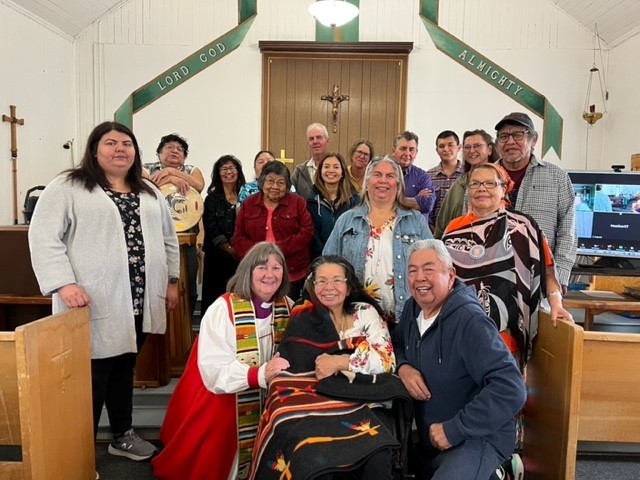 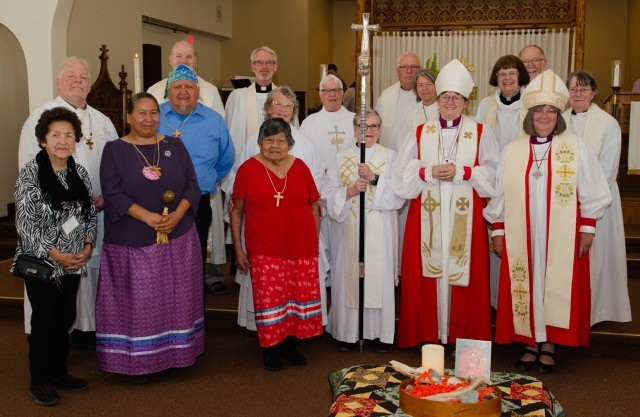 The ministry of Pastoral Elders in the Territory of the People was established by Bishop John Snowden in the former Diocese of Cariboo in 1978.

In an attempt to recover an early practice of pastoral partnership, individuals in a First Nation community were identified as wise, spiritual elders and were commended to the Bishop for consideration to be commissioned as a “Pastoral Elder.”

Cariboo’s first commissioned Pastoral Elder was Hilda Austin. Hilda was from the community of Lytton. She was always present during times of pastoral need: at funerals, feasts, during church, at baptisms providing comfort and guidance to her people in their own language.

Pastoral Elders participate in prayer leadership in public worship. They provide prayer at funerals and feasts. They offer words of wisdom and guidance at baptisms. They care for their community. They hold the language and customs of their people and balance those with the language and customs of the Christian Anglican Faith. They bring to our corporate Territorial and Regional Gatherings prayer, music, wisdom and story. Pastoral Elders are ministers of tradition, language, prayer, pasturing and community.

The tradition of commissioning and licensing Pastoral Elders continued in the new configuration of the Anglican Parishes of the Central Interior. In 2011, Dorothy Phillips of Boothroyd was made a Pastoral Elder.

Continuing the tradition, we celebrated the commissioning and blessing of 9 more Pastoral elders:

A few words about each:

Amy Charlie – Amy graduated from St. George’s Residential School in Lytton. She also returned to work there after graduation during its final years of operation. Amy and her late husband Eddie would together be called upon to share in prayers at funerals in the community. After Eddie’s death, Amy has been called upon to take leadership in pastoral ministry at funerals and other occasions, growing in her strength and leadership in the bridge ministry between traditional and Christian practices – which reflects her discovery that God is the loving gentle God taught to her by her parents, and re-experience in the church after healing from the distorted image of God experienced in Residential School. Amy has a deep spiritual life and profound care for her people.

Pauline J. Michell & Ernie Michell   Ye’tek’ sheet, Good afterday; my name is Quey’stala (Pauline) from N’kluk’kluk’tn (Kanaka Bar) and Sn’k’yep (Ernie) Michell come from Nahaminak (Siska). It is a pleasure to share A little of “who we are and what we do” regarding spirituality and “walking with our creator”.   We have been trained by 24 Elders’ within the Nlaka’pamux Nation to assist with a variety of traditional, cultural and traditional ceremonies. These ceremonies consist of prayers, drumming, weddings, baptism and funerals to name a few.   The late “Mildred Michell” who also was a Pastoral Elder brought us with her to these ceremonies and in turn as we watched and learn this way of work to “walk in Mildred’s footsteps. We have been “asked” and doing this part of work for the last 30+ years.   Just recently, the Territory of the People Anglican Church wanted to acknowledge and honor us with a title “Pastoral Elder”. This is so People in general will be able to seek our guidance in prayer and song to assist individuals and families as needed.   It has always been a pleasure to work alongside of many Bishops, ministers that have been guided to work with the “voice of our creator”. May We All continue to walk, pray and with the guidance of our creator and ancestors that have come before us to assist those in need.

Jimmy Toodlican – Known as a great story teller and keeper of the language of his people, Jimmy can to quote Jim White: “Spin a yarn like no one else I know!” and Jim White goes on to assert: “Jimmy is known as a deeply spiritual man.” He is called upon to speak and pray at weddings and funerals. He has most recently retired as a linguist for his people and for the Okanagans. Recently deceased he cared and prayed for God’s people in the community as a teller of sacred stories and a keeper of history and wisdom. A full account of his funeral service is here

Bert Seymour: Affectionately known as “Uncle Bert” . . . Bert has a dry and subtle sense of humour and takes great delight in “pulling your leg” . . . He has long been associated with the little church at Shackan. He comes from the lineage of other pastoral elders Hilda Austin and Mille Michelle. Bert is always available when called upon for prayer. He also tends the traditional ways, ensuring that they are practiced properly, respectfully and correctly.  Burt died in 2018.

Jim White: The Rev. Jim White served God in the community of Cariboo and with deep joy and profound respect was privileged to serve in the first nation’s communities of Lytton Parishes, Scw’exmx Parish – Nooaitch, Shackan and Shulus. Jim was a priestly presence in these communities, but even more importantly was a sacred ear and heart to the people with whom he has been called to serve.  Jim was honoured and remembered by many throughout the Territory of the People, including his Indigenous brothers and sisters, at his funeral September 1, 2018.

Dorothy Phillips: Dorothy was installed as a Pastoral Elder in May 2011 at the Assembly. In her announcement, the Bishop said, “Dorothy has given outstanding leadership to her parish, to the Anglican Parishes of the Central Interior and the wider church.” Dorothy was a key member of St Andrew’s, Boothroyd by offering leadership in worship as a Lay Minister of Word and Sacrament, and caring for all aspects of her parish church. Dorothy attended Sacred Circle, Provincial Synod, and was a keen leader with the Anglican Parishes of the Central Interior, now known as the Territory of the People. A recognized leader in her community and within her church, Dorothy was a well-respected Pastoral Elder who served the church and wider community faithfully until her death in February 2022.