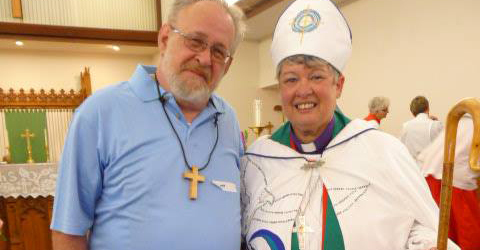 This entry into St Alban’s history highlights the priest, Jim White, who lives in the community with his wife, Phyllis.  Jim arrived in Ashcroft in 1988, a time he describes as dark days for Ashcroft.  There was a downturn in the economy with Greyhound relocating to Kamloops, the Noyes trial was underway, details of abuse at St George’s residential school in Lytton (which was also part of his territory) was beginning to surface and several deaths by suicide happened shortly after their arrival.  Jim said he learned to “shut up and listen!” when the accounts of terrible events were being told.

Jim came from Kamloops, from the Church of Cleopas and had been hired to work 1/3 time as a priest here and 2/3 time as the Archdeacon for the Bishop on discernment of lay people into their ministries.  Two people of note whom Jim mentored were Lois Petty and Ethel English.  Lois was ordained as a Deacon and Ethel, after further training, was ordained as a Priest and served here in later years.

Jim noted that it was one of the most enjoyable parts of his work, that of discernment and training of lay people into their various ministries.  He facilitated the four-year Education for Ministry Program and did other hands-on training programs with the congregation.

If you know Jim at all, you know he is a great storyteller.  He related an occasion where he had accidentally locked his keys in his van.  The nearest locksmith was in Kamloops and it would have meant coming here at great expense to unlock the vehicle.  Jim contacted the RCMP for assistance and, as Jim tells it, the officer who knew a local B & E artist contacted him and he came and picked the lock while the officer had his back turned.

1991 was St Alban’s Centennial year and there was an emphasis on tracing the history of the church and past parishioners.  A Centennial booklet was published and a party celebration held on St Alban’s Day in June of that year.

Another favourite recollection of Jim’s was the youth group of 1991 when the parish supported their daughter, Heather, on an ecumenical trip with Lutherans.  For three months a group of Tanzanians spent time in Canada and then the Canadian group spent three months in Tanzania.  It was life-changing for Heather and Jim said the parish support was incredible.

A highlight for Jim came in 1998, the 10th Anniversary of his priesthood at St Alban’s when the congregation purchased tickets for him and Phyllis to spend a week’s vacation in Waikiki, Hawaii.  He said it was the only time the congregation ever saw him speechless.

Other people Jim remembers as being incredibly supportive during his time at St Alban’s were Ken Lawn, Lois and Bill Petty, Hazel Tuohey, Roger and Nora Bennett, Sylvia Strathearn and Marg Lomond.  One of the things that sustained Jim during his time at St Alban’s was the “faithfulness of the people who attended Sunday after Sunday”.  Another sustaining practice was the weekly Eucharist.

One of Jim’s “last acts as a priest here” was to help build the Millennium Park in Ashcroft.  It was a great experience for him and the young people who participated in the creation and construction of the park.

In 1999, Jim moved his family to Kindersley, SK, where he had a 6-point parish.  After suffering a heart attack and two broken ankles in 2½ years, Bishop Gordon asked him to come back to ministry in Clearwater where Phyllis was working as a nurse.  After two years, they retired and moved back to Ashcroft.

Retirement never seems to last long for Jim and soon he was in 100 Mile working three days per week at St Timothy’s as an interim priest.  After that Jim worked as an interim priest at St Michael’s in Prince George and has provided ministry in Logan Lake for a number of years.  Jim considers himself to be semi-retired as he continues to provide occasional coverage in our geographical area.  He says semi-retired means he doesn’t do meetings and he doesn’t drive after dark.

Jim and Phyllis will be joining us for our 125th Anniversary Celebration on Nov 20th, so please join us and you may hear more stories of Jim’s time as priest at St Alban’s.