WHAT TO TAKE - An evacuee's checklist 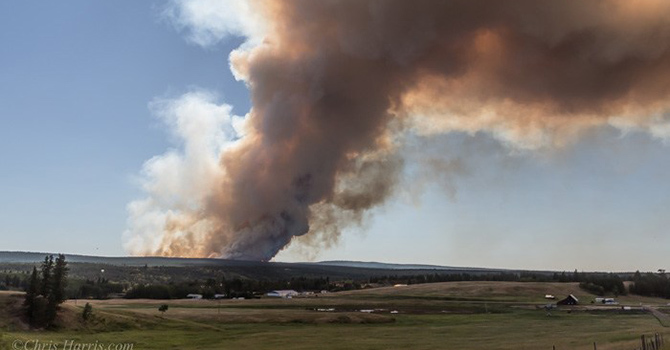 Exiled by Wildfire: An Interview with the Rev. Kris Dobyns, by Sue Careless, for The Living Church

Two priests from the United States were among the clergy who fled massive wildfires in the interior of British Columbia, along with their parishioners and many thousands of others. The Rev. Kristen Dobyns, and her husband, the Rev. Keith Dobyns, have served in the region for the past five years. They came from the Diocese of Indianapolis. Before entering the ministry they had worked in rural family medicine in Washington and Alaska. Kristen agreed to this interview.

Do you live in 100 Mile House or Williams Lake?

When did you leave, during the alert or when the evacuation order was given?

I packed up when the alert came in, keeping essentials I still needed in bags by the door. I left 45 minutes before the order. It suddenly got really smoky and ash was landing in my neighbors’ back yard. They decided to leave, and so did I. Keith had been away visiting our grandson in Ontario. He flew back to B.C. the day of the order and was not allowed to drive home. The roads were only open to evacuees leaving.

What did you take with you?

The District of 100 Mile House handed out an evacuation sheet a few days before with suggestions of what to take. They knocked on people’s doors. I took several days of clothing, food (in two refrigerated bags with half-gallon milk jugs with frozen water in them), my BAS [Book of Alternative Services], iPad, phone, laptop and chargers, dogfood, my dog with a collapsible kennel, in case I needed it. I also took a hat, sunglasses, and jacket if it got cool. Unnecessarily I brought a rain jacket. I took a lockbox with passports, birth certificates, cash, and checkbooks. I brought two albums of photos my mother had given me from my childhood. There were too many other photo albums to grab — not enough room. I also went through the house a few hours before leaving and took photos of everything in every room, including all my clergy attire, stoles, chasubles, etc., to show I had them if needed for insurance purposes. I also took photos of pictures and artwork in case they were burned, so I would be able to remember them. I brought one clerical dicky, a small traveling Communion kit, healing oil in an oil stock, and a green stole. I also brought a family combination BCP/Bible/Psalter from England. Our bishop, Barbara Andrews, asked me and someone in Williams Lake to bring all the parish records, marriages, baptisms, burials, confirmations, and vestry book (which is where we record our services and attendance). I brought those and delivered them to the bishop in Kamloops. My warden from Williams Lake did the same thing.

Did you travel by car? And where did you go?

I traveled by car. I had filled my tanks on [July 5] when the fire started. My dog and I stayed with a parishioner who hosted several of us Sunday night [July 9] just outside the evacuation zone. On [July 10] I drove on Highway 24 to Little Fort on Highway 5. Keith drove up to Barriere and we met up at the local A&W for breakfast. We then drove south to Abbotsford, B.C., in the lower mainland where our son lives. We are staying with him.

Did most of your parishioners leave during the alert or did most wait until the evacuation?

I think most stayed until the order, but I’m not sure. Some just went as far as Horse Lake outside of town. It is still only on evacuation alert.

How are you tracking your parishioners?

I am trying to track parishioners by using their cell phones to send text messages, by Facebook, and through church emails. I found one family I was worried about by seeing a photo of them at an evacuation center in 100 Mile House. They had evacuated from 108 Mile. Then they had to evacuate again, and I found them by calling another parishioner. I am still looking for some others.

Which is harder, waiting in the smoke at home or being ‘safe’ in another city?

It is easier being in another city. Waiting and watching the smoke grow and come towards town was eerie. Not knowing if we would have to leave at a moment’s notice was stressful. My street was full of trailers of people who had already evacuated from the 108 Mile several days before, and then they had to leave again.