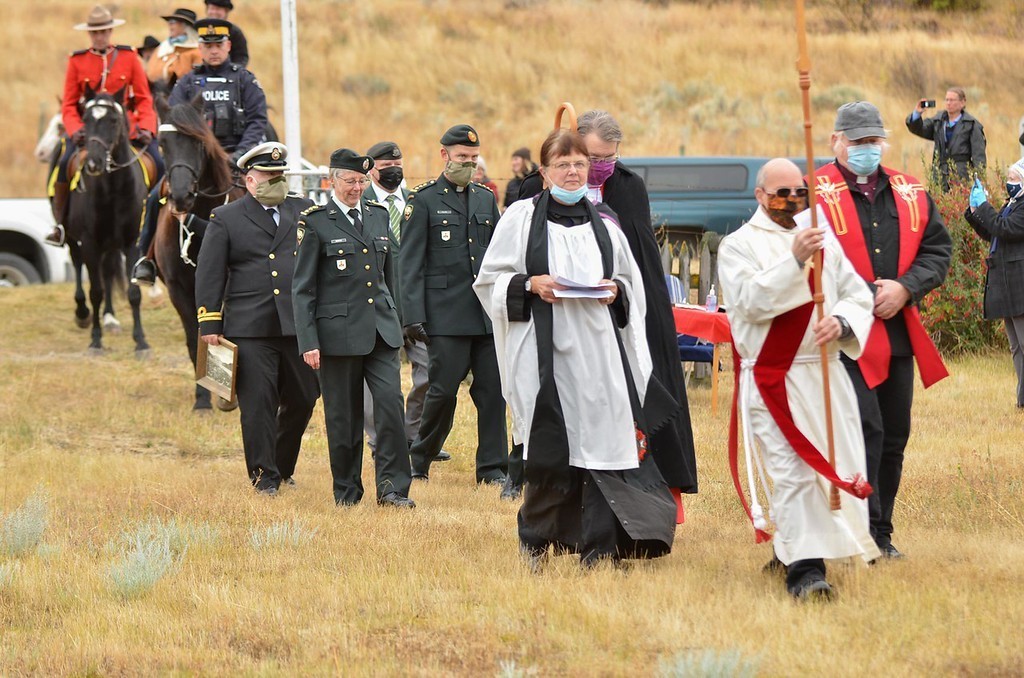 On the afternoon of Sunday, October 18, 2020, Bishop Lincoln Mckoen visited the historic Nicola Pioneer Cemetery to re-dedicate this sacred place of burial after a major restoration project. This spot is located at the western end of Nicola Lake, near the former village of Nicola and the Nicola Ranch.

Over the years, the cemetery had become tired looking; the graves needed attention and the fencing had become shabby. This cemetery was first utilized as a place of burial in 1899 (sadly for a four-month-old little boy) and was officially dedicated in 1905. At that time, the cemetery was part of the Diocese of New Westminster, as the Diocese of Cariboo had not yet been established.

There are over 150 people resting there, including four World War 1 and 11 veterans and 15 children. Many of the names on the headstones will be familiar to residents of the Nicola Valley, as the early pioneer families whose names grace the streets of Merritt are well represented: Abbott, Armstrong, Clapperton, Bent, Garcia, Pooley, and many others. Two of Merritt's early doctors – Dr. George Tutill and his son Dr. George William Douglas Tutill, (who died sadly at age 28 in 1934 after contracting tuberculosis) are buried there as well.

Thanks to generous donations from the Petrie Family (whose ancestors donated the land for the cemetery back in 1899) the Royal Canadian Legion, Branch #96 – Merritt, and the hard work of St. Michael's parishioners, community volunteers, and Legion members, the cemetery was renewed and restored. A vigorous work bee resulted in many loads of old fencing, branches, and assorted debris being hauled away. Volunteers wielded paint brushes and gave the archway, gates, and fencing a new coat of white weather-resistant paint. New signs over the archway and by the highway were commissioned and created by Funk Signs of Kamloops and installed. A flagpole bearing the Canadian flag and the Anglican Church of Canada flag was erected. Gradually, the old forgotten cemetery was restored to a place of order and dignity.

The Merritt RCMP detachment expressed keen interest in the historical aspects of this project, and provided encouragement during the restoration process, and participation in the Re-dedication Ceremony on October 18th. Constable David Feller, in his red serge dress uniform rode a lovely Morgan mare, “Beauty”, who had been loaned by her owner, Miss Kim Moffat, for the occasion. He was accompanied by his colleague Constable Nick Maciejewski, who volunteered that morning to ride “Maxine”, a Canadian Horse (which is a breed unique to Canada), loaned by Miss Casey Race. Both mares were picked up in Kamloops and kindly brought to the ceremony by Ms.Tanya Balmes, owner/operator of Eastwind Horse Transport Company, as her way of offering support to the event. Parking for the big equine commercial rig was tricky, as there were concerns about it sinking into the earth at the cemetery after days of steady rain, but professional skills were put to good use, and the precious cargo was delivered safely.

During the ceremony, former Lieutenant Governor Judith Guichon gave a most interesting reflection about the importance of ranching in the early days of the Nicola Valley. She brought with her a historic framed photograph taken at the Nicola Ranch in 1915, showing 500 steers being loaded onto rail cars, to be transported across Canada and loaded into transport ships, to be taken to Europe to feed the Canadian troops. The efforts of the Nicola Valley ranchers thus helped contribute to the Allied victory in World War 1.

The afternoon of the Re-dedication service was marked by brisk autumn weather, with a touch of snow at the higher elevations; however, this did not dampen the spirits of the participants! The service included traditional hymns played by musicians of the Band of the British Columbia Regiment, who had traveled all the way from Vancouver on the Coquihalla that morning to take part.

Piper Ross Lamont, of Merritt, played the “Lament” during the Act of Remembrance, as officers from the Rocky Mountain Rangers laid wreaths at the graves of the veterans resting in the cemetery. After the Commendation and Blessing by Bishop Lincoln at the conclusion of the service, a procession took place around the perimeter of the cemetery, with the Band and Legion colour party leading, followed by the clergy, army officers, and the riders on horseback – with the horses stepping in time to the music!

Photographs by Ken Gray can be viewed here

The event programme is linked below