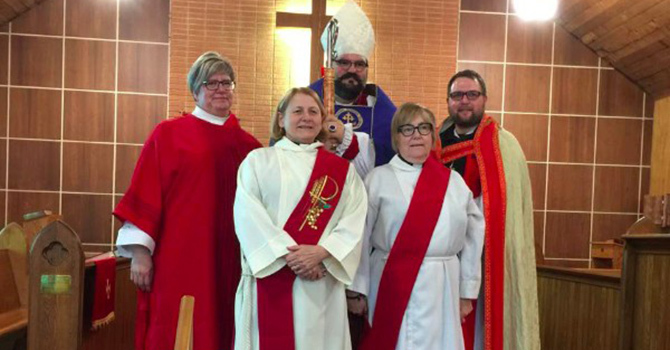 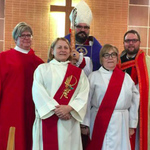 The following is the first instalment of a two-part article on locally trained ministry within the Anglican Church of Canada.

On March 17 the Territory of the People, formerly known as the Anglican Parishes of the Central Interior, ordained its first two locally trained priests. Having each previously served for one year as deacons and undertaken all their studies locally, Martina Duncan and Angus Muir were set to join the team at St. Alban’s Anglican Church in Ashcroft, B.C. following their ordination to the priesthood.

The increased role of locally trained ministry—in which leaders and candidates for clerical positions receive all their studies and training from within their own local community—is a growing trend across the Anglican Church of Canada. But it is in rural and northern dioceses that locally trained ministry is making its greatest leaps and bounds as a vital part of wider Anglican ministry.

National Indigenous Anglican Bishop Mark MacDonald said that locally trained clergy, mostly non-stipendiary, are particularly common in areas such as northern Manitoba, Ontario, and Saskatchewan. He recalled that almost all clergy in the Diocese of Alaska during his tenure as bishop there were locally trained.

“It’s very, very common in a number of contexts, and it’s growing,” Bishop MacDonald said. “We’re seeing more and more of this type of ministry.”

In the Diocese of Brandon, Bishop William Cliff is currently putting together a program to identify leaders in parishes and provide them with education to take their ministry to the next level.

“We are a Council of the North diocese without a great deal of resources, and we are spread over a very large area, and many of our parishes are small due to rural depopulation,” Bishop Cliff said. “So locally raised clergy are going to be the way some of our rural parishes survive.”

In the Territory of the People, Bishop Barbara Andrews said that while the trend is based partly on population shifts and economic pressures, it also represents an embrace of the belief in a “ministry of all the baptized” that all Christians are called to—and that “within the community, all the necessary gifts are there for leadership already.”

“We recognize who the natural spiritual leaders are of a community,” Bishop Andrews said. “In a sense you might say that it’s more of an Indigenous peoples’ way of looking at spiritual leadership in the community … We call forth the spiritual leaders, and then we’re committed to helping them get the necessary training they need.”

Far beyond forming the majority of clergy in many areas, Bishop MacDonald said that locally trained clergy have become “in many places, the only way that you’re going to have any kind of ministry at all”.

“The capacity for ministry in the old model is gone all over the place,” Bishop MacDonald said. “And that’s increasing rapidly, so that you’re finding it’s not just Indigenous congregations on remote reserves, but also communities in rural areas, and even in some cases in suburban areas.”

Archdeacon William Harrison, currently director for mission and ministry in the Diocese of Huron, said that the addition of locally trained ministers to parishes and working with licensed lay readers and ministers has resulted in a greater emphasis on teams able to respond to a variety of tasks.

In doing so, Harrison said, “It creates a more flexible church.”

“The model that we’ve been working with of parish churches, each of which has at least one sort of full-time priest and a building … that model is rapidly failing,” he said.

“Many of those do continue and will continue. But as a uniform model for the whole church, that one’s coming apart … What we’re looking at is the flexibility of ministry to meet a flexibility of Christian communities, and I think our faith communities, our congregations, are starting to look somewhat different.”