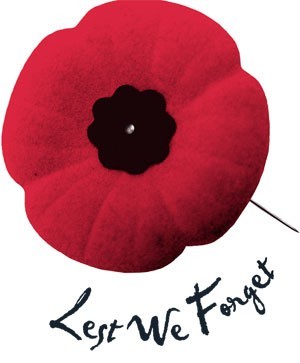 On Remembrance Day we stop to remember those of our country who did not return from the conflicts in which we have fought.

We remember also those whose injuries are both seen and unseen. So it was this past November 11th I was heartened by the many people of our community who came to remember – old, young, teenagers, and all in between. We came to recognize and honour the sacrifices made.

This year was the 100th anniversary of the ending of the ‘war to end all wars’. We were asked and encouraged to ring our church bells to mark this occasion. Can you imagine the bells ringing out at the end of the war in celebration? What a glorious sound to all who were affected by the war!  So people from our community gathered on the 11th at St Andrew’s and St. Mary’s to ring the bell. Some of us in the senior category, some very young, and others in between. At 4:26 pm as the sun was going down we started with intervals of 5 seconds between each ring. We discovered that ringing the bell is not an easy task!

There was a different feeling amongst us as we started to ring the bell. There was a sense of the historical nature of the venture – repeating the ringing of the bell so many years later. As we rang, many spoke of the people for whom they were ringing the bell. And there were some tears and some deep sadness.

But it is not who rung the bell, or why we rung the bell, at least not for me. There was a quietness in the church as this was taking place. Conversation was minimal if at all as we were lost in thought between our turns to ring. There was, dare I say, a sense of holiness that surrounded the group; a sense of purpose outside of ourselves. There was also a sense of hope and of peace. That sense of holiness, of hope and of peace has given me pause for reflection. Hope is that light that shines in each of us each day. It might be a small flame but the flame is there. With hope for a better world in the future comes the desire for a peaceful world where all can live, love and raise their families. Where disagreements are settled with discussions not threats. Where challenges are met with optimism and not violence. Where we see similarities between nations and peoples rather than difference. Where we agree to stay in conversation until we can see better options for living together. Where we see the value in each other and the dreams we hold dear.

Our numbers at Remembrance Day services are increasing. I see that as a very hopeful sign. We know war is devasting and has long term effects on combatants and non-combatants alike. We understand the sacrifice of lives. We understand the devastation of war. We hope for peace. Peace in our hearts, in our homes, in our communities and our country and in the wider world. May peace be with us all.

Response from the Heart

A Prayer for the People of Lytton