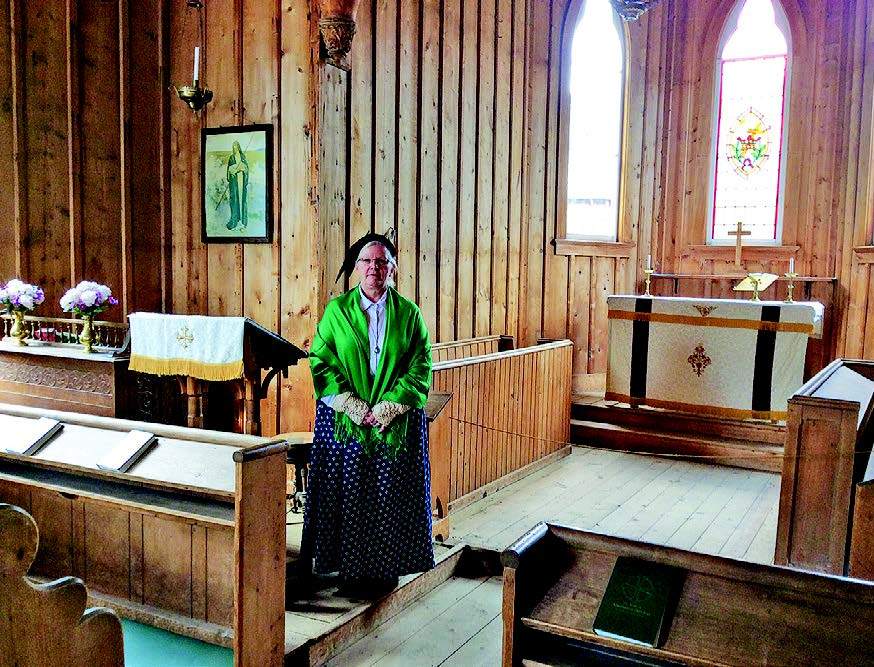 “I’m loving it!” says Ashcroft resident Martina Duncan, of her “summer job” at Barkerville. She was recently ordained as a transitional deacon at St. Alban’s Anglican church, and is now working at St. Saviour’s Anglican church in the historic gold rush town, where she ministers to the site’s staff, holds three services a day in the church, and conducts daily tours of the historic old cemetery.

She admits there has had to be a slight adjustment to historic accuracy, as women were not ordained as ministers in the Anglican church until late in the 20th century. “I am Mary Page Reynard, wife of the Revd. James Reynard, who established St. Saviour’s in 1869,” she says. “I explain that my husband is away, so I am filling in for him.”

Reynard had the church built in the Gothic style he knew from Europe, although St. Saviour’s is built from wood, not stone. Duncan says that European visitors love the Gothic design inside and out, although when she tells them the church is 147 years old some of them smile sweetly. “One woman said that the church she worships in [in Europe] was built in the year 900.” She adds, however, that visitors appreciate the fact that St. Saviour’s represents the history of our province.

“They love that it’s made of wood, and that we have heat in there. Many of their churches aren’t heated.” The church’s massive wood stove, which can accommodate logs up to 45 inches long, dates back to 1869, as do the pews and most of the windows. Many of the expenses of building the church came out of Reynard’s pocket, at great expense. “It cost him six times more to get the windows here and have them installed than it would have elsewhere.”

She is also proud of the antique vacuum, dating back to the late 1800s, that is in the church, although she admits she does not use it, preferring a modem electric vacuum which she uses before the site opens each day. “It’s a hand-pump vacuum that takes two people to operate,” she says of the antique, which was found in the church’s attic.

St. Saviour’s is located at the end of Barkerville’s main street, and would have been the first building people coming to town saw, as the original access was from the opposite side of the town to where it is located today. The site gets 55,000 to 60,000 visitors a year between May and September, and Duncan says that there is a very different expectation of the ministry up there.

“Something I notice is that so many people have no history or connection with the church, but they come in and sit down and are very quiet because it’s so peaceful. Little children especially come in and say ‘Wow, this is cool.’ They feel a connection with the spirituality of God. The younger ones haven’t lost it yet.
“The message, whenever I preach up there, is that God is forgiveness, mercy, love. And there’s always a way back to God.”

Something she is particularly fond of is Church Institute night on August 18, where people were encouraged to sing a song, read poetry, or play music. “There were a lot of educated people here; there was a dramatic society, a music society, a literary society.” Church Institute night re-creates what was once a regular event among Baskerville residents, who used St. Saviour’s because of its wonderful acoustics.

“I’m enjoying it immensely,” says Duncan of her adventure. “Talking to people from all over the world is always interesting. And they are so amazed at the quality of what was built so long ago in the Canadian wilderness.”