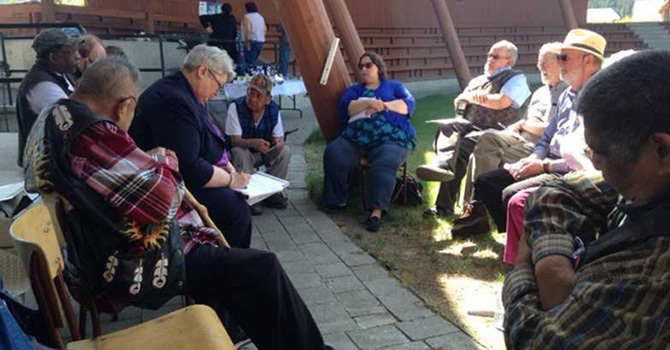 Inclusivity is at the forefront of the Anglican Parishes of the Central Interior (APCI) as the territory rebrands itself with a new moniker—one better reflecting the diversity and shared sense of community championed by its members.

APCI will now be known as the Territory of the People. The name change followed broad consultations last winter in which parishioners suggested approximately 30 new names. The Administration Committee and pastoral elders met on April 17 and reviewed the suggestions, with the Coordinating Council unanimously affirming the name Territory of the People at its April meeting.

While the word “territory” had practical reasons for inclusion—the constitution of the ecclesiastical Province of British Columbia and Yukon already defined it as such—the idea of referring to “the people” rather than a specific geographic location flowed from suggestions made by pastoral elders, and a general sense that inclusivity should be the major priority.

In many First Nations traditions, “the people” refers not to an individual, but to the common life of all people. Pastoral elder Jimmy Toodlican, a parishoner in Shulus, B.C., credited fellow elder Amy Charlie with wanting a name that “involves all the people, without just choosing one nationality.”

“I think it’s a really good title for our territory,” he said.

Bishop Barbara Andrews noted, “The pastoral elders suggested we might want to focus on who we are and who we want to be as ‘the people’ … Personally, I think it reflects better for me the relationship to the gospel and what we’re attempting to do—creating community and valuing all people.”

The need for a new name initially emerged out of discussions about the need for greater autonomy within the territory, particularly the right to elect its own bishop. Following the regularization of APCI’s status by Provincial Synod, the Council of General Synod in November 2015 adopted a resolution officially recognizing APCI as a recognized territory, with status equal to a diocese.

The need to register the territory as a legal entity under the B.C. Society Act offered an ideal opportunity for APCI to take on a new name. APCI was originally formed in 2002 from the remnants of the former Anglican Diocese of Cariboo, which had been forced into bankruptcy as the result of its financial commitments to residential school survivors.

“I think the feeling was that Anglican Parishes of the Central Interior was always a transitional name,” Dean Ken Gray said. “And there was a need to make a final decision about our future here, and how Anglican parishes would be organized and identified.”

Bishop Andrews described the Territory of the People as embodying the ongoing path in the parishes toward reconciliation, which has been a priority for the Anglican Church of Canada as a whole in recent decades.

“We ceased to operate as the Diocese of Cariboo because of our particular history and journey in healing and reconciliation, after our part in the legacy of the residential schools,” Bishop Andrews said, referring to the bankruptcy of the diocese from lawsuits related to its role in running St. George’s Residential School in Lytton, B.C.

“Our major focus has always been on that journey to healing and reconciliation,” she added. “So the [new] name seemed to fit the journey we’re on ourselves.”

Following the affirmation of the Territory of the People, the name will be legally secured under the B.C. Society Act, with registration likely taking place in November.

Bishop Andrews said that despite some puzzlement over the lack of a geographical identifier, the majority of parishioners have responded well to the new name.

“There was a ton of input into it, and it wasn’t an easy decision to make in the end,” she said. “But when we did make the decision—we’re 100 per cent behind it now.”

Bishop Jane and PWRDF present: The Women who Loved Jesus