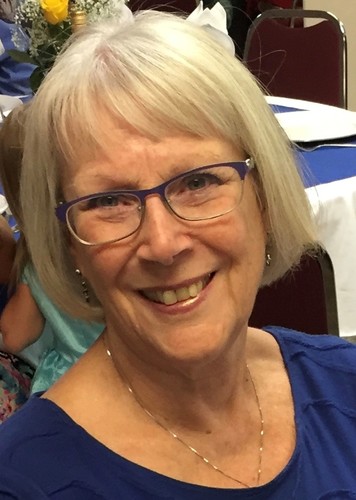 An immigrant from England with her husband Jim and children, Margaret has lived in Kamloops since 1974 (with a three year sojourn to New Zealand in the early 80's).  Margaret loves to travel, read, quilt, and make cards using her photographic skills.  She and Jim enjoy entertaining, especially when it includes their daughter, granddaughters, and great grandchildren!

Margaret was a parishioner at the Church of Cleopas in the Westsyde area of Kamloops for 24 years before the church's closure in 2008 when she transferred to St. Paul's Cathedral in Kamloops. Margaret is an active member of the St. Paul's congregation, and has held a license as a Lay Minister of Word and Sacrament since 2001.

As well as being active in her home parish, Margaret is Chair of the Policy Committee and oversees the formation of new policies and policy revisions for the Territory of the People. She is also recording secretary for  meetings of the Administration Committee, Coordinating Council and Assembly.

In the Fall of 2017 Margaret accepted an interim position as Office Coordinator for the Territory of the People office, where she can be found Tuesday to Thursday from 9:30 am to 4 pm.