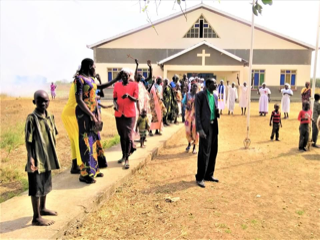 With all the news of the pandemic and the explosion in Beirut last week, there was a little-noticed report about another tragedy within the Anglican Communion: Militant gunmen stormed the Anglican Cathedral in Athooch in South Sudan, murdering most of those inside, including the Dean of the Cathedral. From ENS:

At least 23 people were killed and 20 others were wounded when unidentified gunmen stormed a church compound in the Episcopal Church of South Sudan’s Diocese of Athooch in Jonglei state on July 27. The assailants took six children as hostages, Bishop Moses Anur Ayom told Religion Unplugged.

The gunmen attacked Makol Chuei village from two directions, killing the cathedral’s dean and at least 14 women and children who had sought refuge in the church compound, vandalizing the church, destroying their worship instruments and then setting the area ablaze along with the entire village." (ENS, August 4, 2020).

Our prayers go out to all the victims and their families, with intercessions especially for the safe release of the children taken hostage. We also pray for God's Holy Protection upon Archbishop Justin and all his congregations, and for a peaceful end to the six-year-long Civil War in South Sudan.

And we pray for all those persecuted for their faith around the world, especially our fellow Christians, who by far make up a majority of those so martyred in the 21st century.”